Being first-time competitors in the provincial and national Skills Canada Robotics Competitions, we strived to create a design which completed all of the design objectives of the course. We did not focus on winning but focused on becoming familiar with all of the necessary skills involved in building robots. It was a lot of learning. This is what Michael and I came up with…

Description of The Course

The game is a battle against time. Each team has a side. The teams do not interact with each other. The goal is to build two oil pipelines with wooden pipe cradles and black pipes. The pipelines must be built in the two pipeline pathways defined by the tape lines. Once the pipelines are assembled, a string is pulled to release steel ball bearings (the oil) down the pipeline. If the pipeline is assembled PERFECTLY the ball bearings will roll into the purple Refinery destination. All steel ball bearings which do not make it will roll on the floor and may be picked up and placed into the yellow Hazardous Materials Containment Area. Points are awarded for placing cradles and pipes into the pipeline pathways and getting ball bearings into the refinery area or the hazard containment area. Each round is four minutes. Each ball bearing on the floor after the four minutes will deduct points from the total score.

We were given a Tetrix robotics kit to build our robot with. After playing around for a few hours with it, we quickly learned it did not have nearly enough components to create our general design. We planned to make a crane-forklift combination. It needed to be versatile to pick up cradles, pipes and occasionally a ball bearing. Objects of entirely different shapes and sizes. The robot was controlled via two separate RF controllers. One for driving and one for lifting the grippers and closing the grippers.  The robot carried each cradle and then each pipe to the pipeline area. This was slow, but it worked and got us to nationals. Each gripper axis was moved by a motor-controlled spool and fishing line. When the spool rotated, the fishing line wound up, pulling the axis in one direction. On the gripper, there were elastics to pull the line back out when the motor rotated in the opposite direction. The vertical axis relied on gravity to pull the fishing line back out. This system worked alright but ran into issues with friction along the vertical axis slider, the fishing line getting tangled and torque. The wheel system relied on two drive wheels and two onmi wheels. A problem with the course design (or intentional trickery) was that even if the pipeline was perfectly assembled by a human, the balls gained so much momentum that the pipeline got destroyed entirely when they rolled through. At provincials, we intentionally did not release any ball bearings from the pipeline. 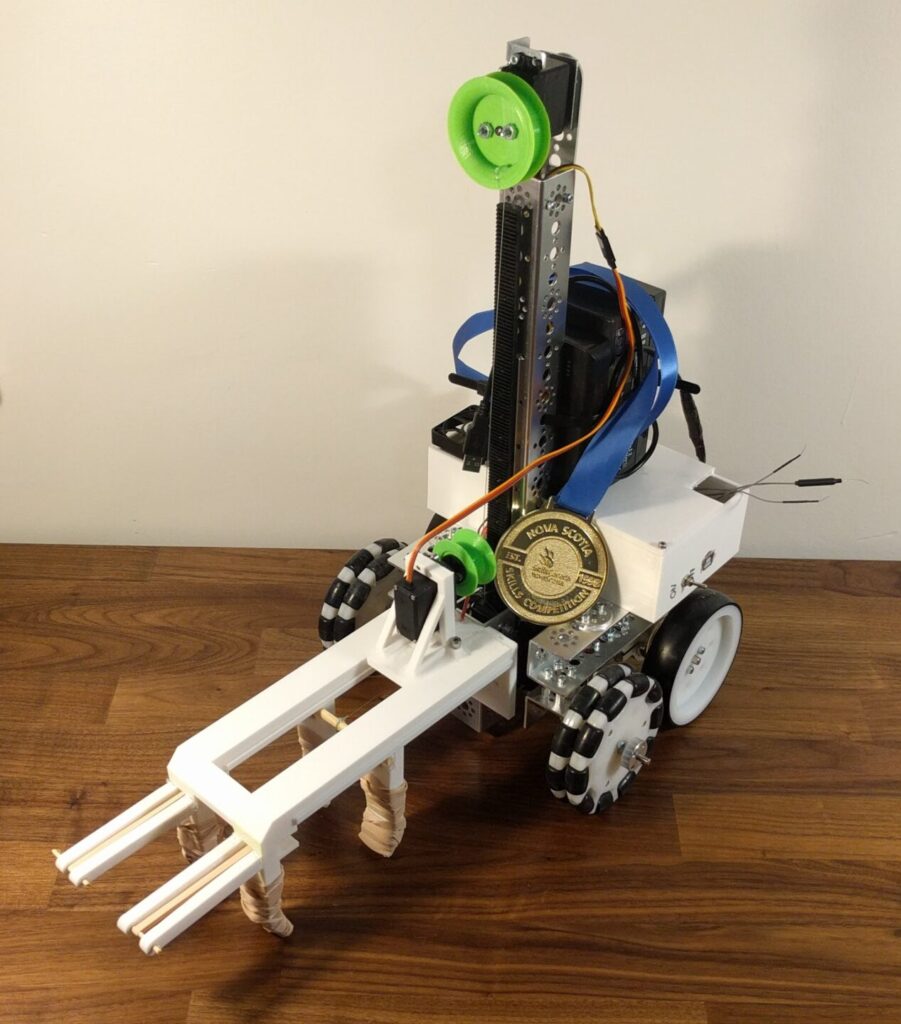 The design switched up a lot for the national competition. We made two completely new robots, they were identical in functionality and controlled by independent RF controllers. This was done to increase pipeline assembly speed and for redundancy because of an incident at provincials requiring one of the members to control both RF controllers at once.
The next big change was an onmi directional movement system achieved by the use of four onmi wheels mounted 45 degrees from the forward axis. Four high-torque servos were modified to be high-torque motors coupled to each wheel. This movement system allowed for longitudinal and latitudinal motion, as well as yaw control. The goal was quick translation to easily line up with the pipeline and pipe/cradle collection area.
The final major change was changing the gripper actuation system. Instead of using a spool and fishing line to control gripper motion, we switched to a belt and pulley system to increase reliability. This allowed for the removal of elastics on the gripper and not relying on gravity.
Since we wanted to capitalize on as many points as possible, and we were aware that the ball bearings could not actually roll through a successfully assembled pipeline, we created a cloth bag to catch them. We moved that bag into the spilled oil zone to collect some points for the balls.